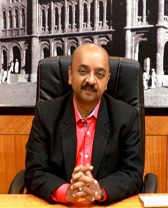 Welcome to the American College!

I would like to share with you the short history of the college. The emergence of missionary education spreading across the wider parts of erstwhile Madras Presidency at the end of 19th century and start of the 20th century saw education reaching the unreached spaces.

One such defining moment was the establishment of The American College in Madurai, started initially as ‘Pasumalai College’ at Pasumalai near Madurai. Established in 1881, under the initiatives of G.T. Washburn, an American missionary, this institution of higher education is known for its focus on academic excellence.

The college was shifted to its present location during the period of W.M. Zumbro, its second Principal, who had his formal education at University of Michigan, Columbia, and Yale. He made a proposal in the year 1903 to the Missionary Fund in the United States to shift the College to Madurai. Verdant locale and imposing structures of heritage value are hallmarks of the present campus of The American College. Amidst the din and bustle of the city, the college stands like an oasis.

The idea behind this shifting was to give a new vision to Christian higher education. By this, Rev. Zumbro meant that education should be made available to the common man despite divisions based on caste, creed, and religion. Rev. Zumbro envisaged that once Christian education goes public, people of Madurai would acquire a character, which would be beneficial for the city in the long term. In his words, Madurai should grow with American College and American College should grow with Madurai.

The century old American College main building symbolizes this slogan, as this grandiose structure modelled on the Indro-Saracenic architecture represents a synthesis of Muslim designs and Indian materials developed by British architects in India during the late nineteenth and early twentieth centuries. The hybrid has combined diverse architectural elements of Hindu and Mughal with Gothic cusped arches, domes, spires, tracery, minarets, and stained glass, in a wonderful, almost playful manner. Rather than Gothic or Victorian, the architecture signifies the arrival of modernity in Madurai.

The Main Hall of the building was indeed a central element in the major intellectual shift that took place then in the form of public lectures to the citizens of the city. Eminent literary scholars and international figures like Rabindranath Tagore and French Premiere Georges Clemenceau visited the college and delivered lectures in the Hall.

In fact, Tagore gave public lectures in the year 1919 and collected Rs. 2,365 out of which he gave Rs. 365 for starting an endowment in the American College.

With more than 136 years of history behind, the college is remembered for its pioneering role in the cause of college autonomy. American College has many firsts in its history.  G.T. Washburn Hall is the first student hostel on the college campus in South India and the first college in India to use computers. The Daniel Poor Memorial Library is the first library in the southern part of Tamilnadu to be fully automated, and pioneered the use of Bar Code in libraries. Its successful beginning of a Choice Based Credit System began with the college autonomy in 1978.  Its completion of 136 years of higher education bears testimony to the position that the college currently enjoys.

The college has maintained its contemporaneity by offering courses in Biochemistry, Biotechnology, Microbiology, Computer Science, Business Administration, and Social Work. The department of Religion, Philosophy and Sociology contains in itself a rare combination of subjects seldom found elsewhere. Started during 1985 and this is the only college in Asia to have RPS Department besides, innovative courses such as Gender Studies, Dalit Studies, Folk Arts, Epigraphy, etc.

American College has embarked on a new venture by building its satellite campus at Chathrapatti, on the Madurai-Natham highway to reach out to students and communities residing in rural Madurai. The new campus, spread over 100 acres on the foothills of part of Alagar hills, has retained the natural splendour that earmarks rural Madurai. The buildings are constructed keeping in mind the preservation of nature and the greenery that are found in abundance. The campus will house both residential courses like MBA and non-residential programmes in the near future. The additional campus will enable American College to grow exponentially thereby alleviating the space constraints in starting new courses in the emerging fields.

Fire purifies gold by destroying the impurities in it. Yet, it does not consume any part of the gold. When gold comes out of fire, it becomes more pure and lustrous. This is what American College is doing to its students.

Citizens of Madurai owe a great deal of respect and gratitude to The American College, which is spreading inclusive education based on science & reality.

Proud to be an “Americanite”!