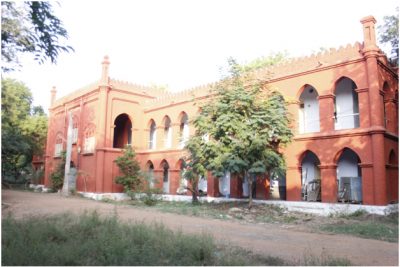 The Washburn Hall, the oldest residential hall for the students of the college, had its origin in 1908, the year in which the college was shifted to its present site. The ‘Main Hostel’, as the Washburn Hall was then known, was constructed in three stages. Construction of the ground floor in the western side with side wing on both sides was the first stage and was completed in 1909. The second stage of construction was raising the first floor on the existing ground floor in 1914. The third and final stage of construction was the extension of the previous structures in the Eastern side. The extension work was started on 28-10-1916 and was completed in 1917.

E.M. Flint was appointed as the Warden in 1914. Until then, that is from 1909 to 1914, the then Principal Rev. Zumbro probably was the acting Warden. The first Hostel day was celebrated on February 19, 1921 and the Chief Guest on that occasion was Monsieur Clemenceau, Ex. Premier of France. In the year 1950, the name of the hostel was changed from ‘Main Hostel’ into ‘Washburn Hall’.

The Warden of the Hall is responsible for the day-to-day administration of the Hall. The superintendents of the Hall will assist the warden in his day to day administration. Matters pertaining to policies are taken in the Hostel Board meetings of the college. The views and voices of the inmates of the hall are represented through the periodic meetings of the hall cabinet that consists of an elected general secretary, a sports secretary, a prayer secretary and a mess manager. The student residents run the hostel mess under the dividing system. The cabinet is elected by the residents of the hall and implementation of any new programmes is always through the cabinet.

There are fixed timings for dining and entertainment.

From Monday to Thursday, the study hours of the hall will be between 8.30. P.m. and 10.30 p.m. During the study hours, students should do quiet reading. If any Saturday is declared as working day then the previous night [i.e., Friday night] will have regular study hours.