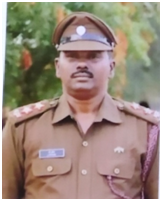 LT J Prince, Department of Tamil is the Company Commander of the Army Wing of the college from 2016. He was appointed as Care Taker NCC Army in September, 2016. He was commissioned to the Service on 3 October, 2017 as Lieutenant NCC Army at Officer’s Training Academy (OTA) Kamptee by the Ministry of Defense, New Delhi.